In Oberammergau, woodcarving has a long tradition. Since as far back as the 12th century, the craftsmanship of woodcarving has been handed down, bringing the famous Passion Play village and the Albl family international renown.

Our family tree can be traced back to 1556 since when we have lived in the idyllic mountain village in Southern Germany, close to the border with Austria. “Albl” is one of three familiy names that survived the plague in 1633. Our forefathers also made the “passion vows” for protection from the plague and since then, every 10 years, the Passion Play has been performed in Oberammergau. But long before this exceptional legacy, our home village had an even older tradition that was documented as early as the 12th century by the monks from the Rottenbuch monastery: the art of woodcarving. Magnificent altars and large sculptures across every continent are witness to the success story of our home town. Large woodcarving studios played a prominent role as focal points and representatives that accompanied and supported the development of the village’s history. Then, as now, similar to other Alpine valleys, small workshops and studios are spread across the entire Ammer Valley and can be found in the gardens and homes of families. The role of the studios in coordinating and directing this unique network is particularly important for the trusted cooperation needed for successful implementation of large projects and church commissions. 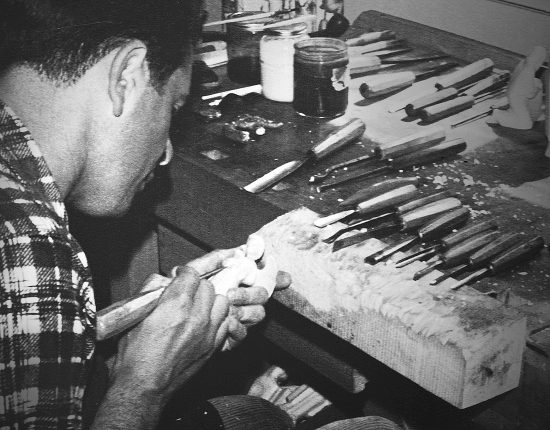 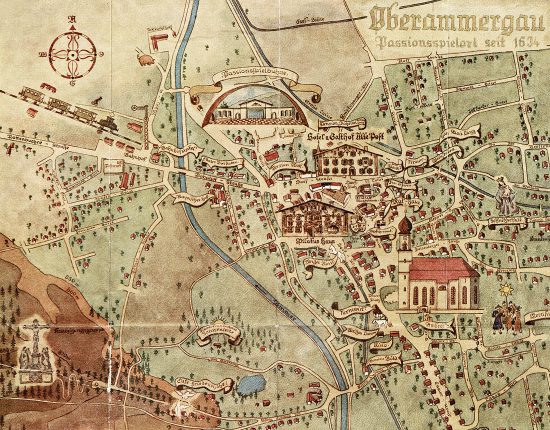 In the plague year of 1633, the fate of Oberammergau would change fundamentally. After more than a quarter of the villagers fell victim to the Black Death, they finally turned in desperation with a vow to God. They swore to perform the passion of Jesus Christ every 10 years, if God spared them from the plague. According to tradition, no one has ever died again from the plague in Oberammergau since then. Our ancestors Franz-Xaver-Joseph and Paul Älbl were among the surviving families, who made the original plague vows and therewith established a century-long tradition that has lasted until today. Since 1634, the people of Oberammergau have performed the Passion Play every 10 years with rare interruptions and a few anniversaries. All of our ancestors have unfailingly played their part in fulfilling the vow. And so they played leading roles like the Apostle John, Thomas or Matthew. They also played in supporting roles such as Nicodemus or Dimitius and expressed their enthusiasm for the Passion Play as the people, in the choir, with the masses or even giving theatre signals as an official cannoneer. The Passion Plays, which have been performed for centuries, have played a significant role in shaping the mindset of the citizens of Oberammergau. Alone the sheer size of the passion theater house as a village landmark, illustrates the importance of our fulfillment of the vow. And so for the woodcarvers it was and is always understood, that they should express this meaning in their craft. Implementing biblical motifs such as the arrival in Jerusalem, the last supper, the stations of the cross, and in particular the crucifixion group, were always given special care in all stages of production. 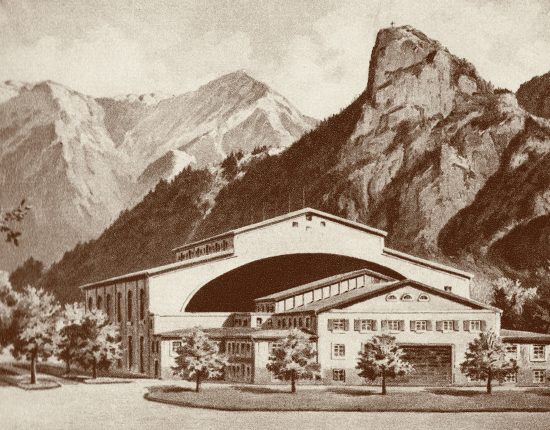 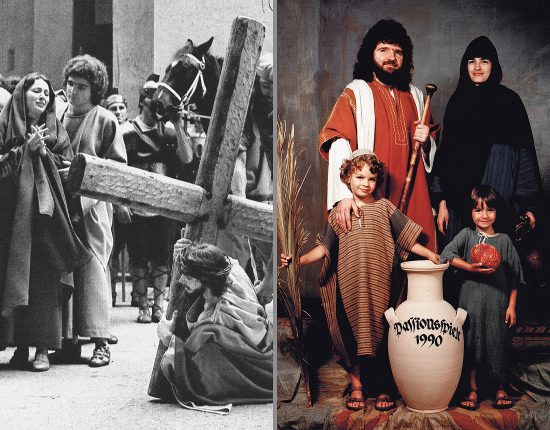 In the early days of our craftsmanship, hard work in the fields dictated the months when there was no snow; our ancestors could only withdraw to the workshops in the wintertime when they devoted themselves to woodcarving. It wasn’t until the Baroque period, when large, splendid church decoration was commissioned in Oberammergau, that they could focus on craftsmanship all year round. Since then, all our predecessors carved in their own small workshops and worked closely with the large studios of the time. From the 1970s, the desire for independence became stronger and Albl Josef Georg moved into a workshop with its own store opposite the Passion Play theater. His son Josef built on this and formed the family business we know today. The first international commissions from the USA, Mexico and South Korea paved the way to seek out greater collaboration with other woodcarvers and form a small team of sculptors, carpenters and painters to form their own studio. And so, in spring 1999, a move to a larger business with its own workshop was called for. Other international projects in the USA, Europe, Asia and Australia followed and led to sons Johannes and Markus joining. And now, we look back over 14 generations — defined by their craftsmanship and their home — for whom we are now the embodiment. We are especially proud of our family’s heritage and the history of our home village. And that is why we call our studio: ALBL Oberammergau. 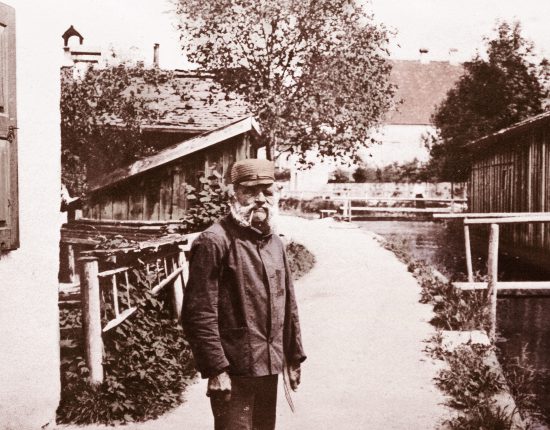 Albl Mathias in front of his house (no. 133b) at the old millstream in Oberammergau. 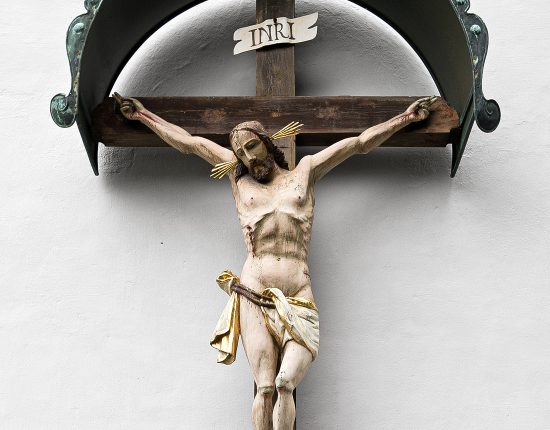 In 1863 Albl Mathias created a 4’ 9” tall crucifix for the St. Martin Catholic Church in Garmisch-Partenkirchen, Germany. 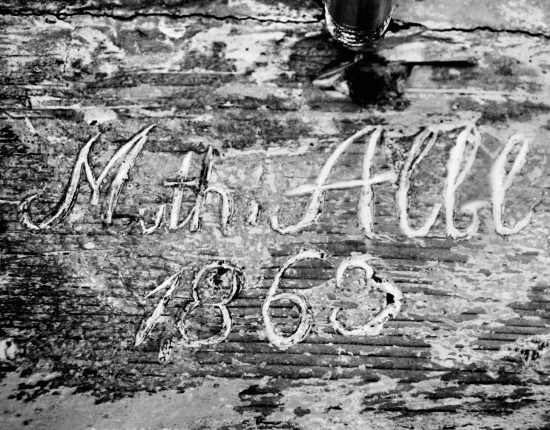 We discovered his signature on the back of the corpus in the restoration process a few years ago. 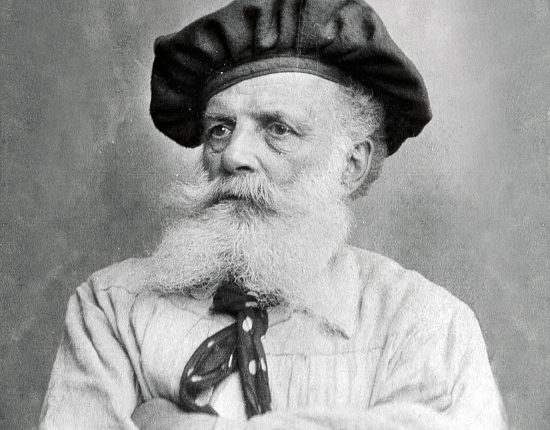 Our ancestor Albl Sebastian (born 1844) is the brother of Mathias. Both studied sculpting and painting at the Munich School of Art. 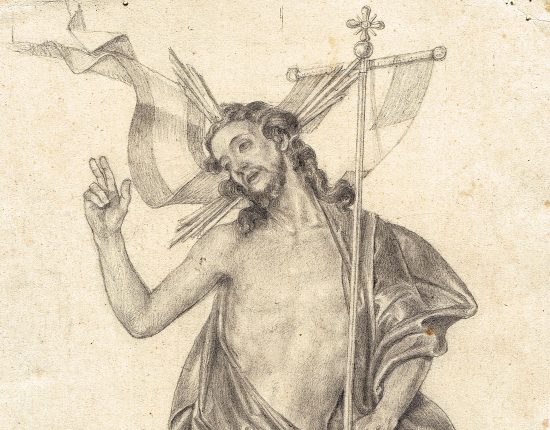 Resurrection of Christ; Pencil study made by Albl Josef Georg in 1945 at the age of 16 during his apprenticeship in the woodcarving school of Oberammergau. 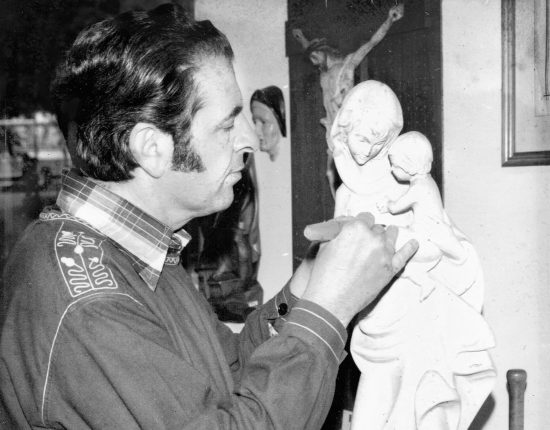 Albl Josef Georg carving a Madonna in his atelier. He was the 12th generation of the Albl family. 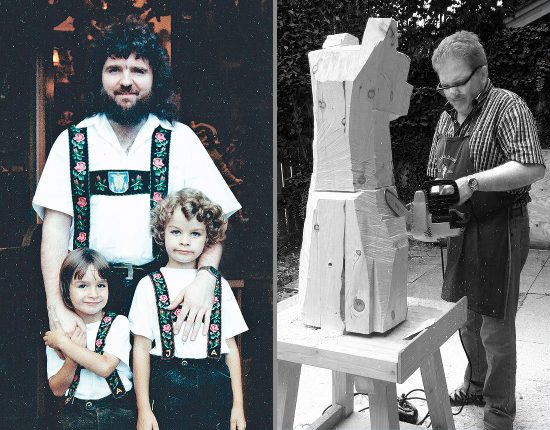 1990: Albl Josef with his two sons Johannes and Markus during the Passion Plays with the characteristic long hair and beard of the Passion Play actors.
2016: Josef in action with his chainsaw, shaping the first rough form of his sculpture out of swiss stone pine. 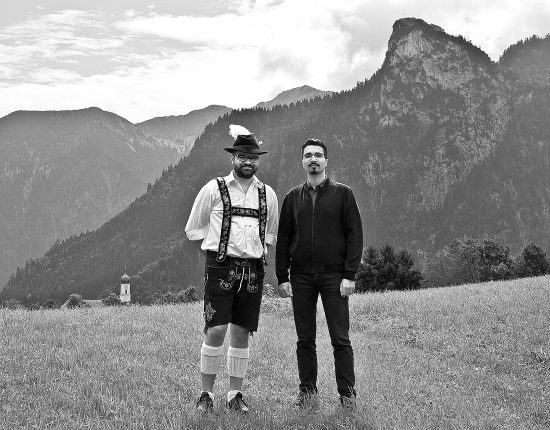 Johannes and Markus are the 14th generation of the Albl family. They run the studio with new ideas and concepts in order to master the tasks of today and tomorrow.

Our family tree is going back until 1556 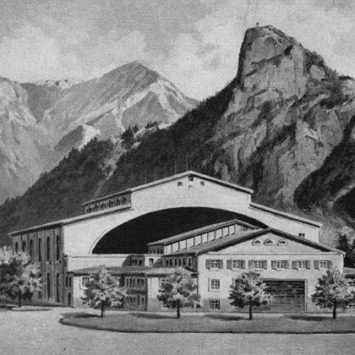 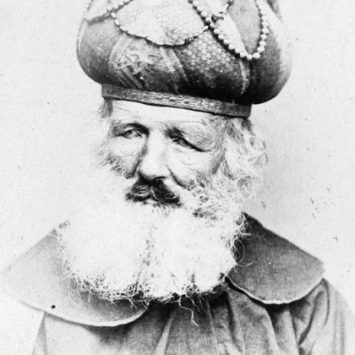 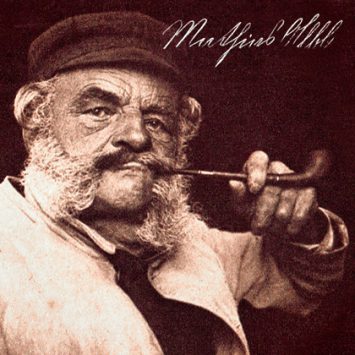 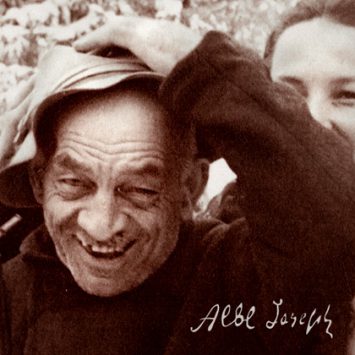 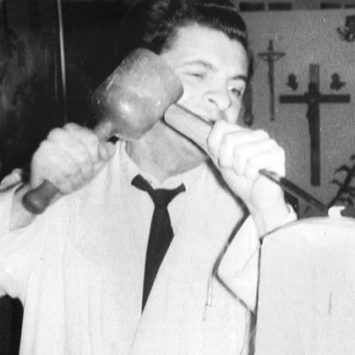 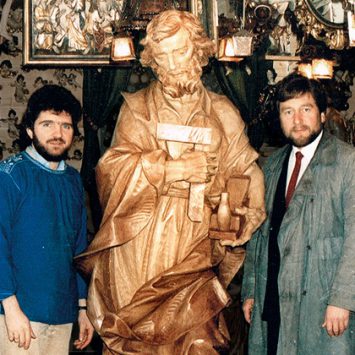 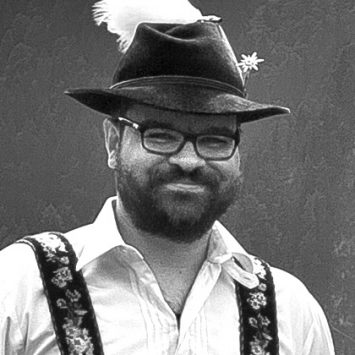 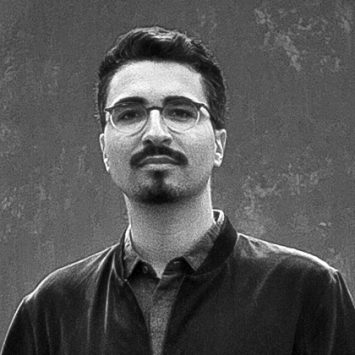 For decades, our studio has collaborated with diverse artists and craftsmen in order to implement large commissions cost-effectively and in short timescales. We think of our network of specialists more as a large family in which everyone passionately plays a part in delivering excellent quality.

The tradition of trusted collaboration between art studios and self-employed artisans in Oberammergau goes back a long way and our ancestors also worked mostly for other studios. The call of self-employment followed, developing over the course of time into our family finally establishing our own studio. The role of a studio to lead brings with it a great responsibility because, as a focal point and representative, it has an important role to play in our village. Today, we can count on the support of many workshops. Along with our woodcarvers, our team is made up of a wide variety of craftspeople. Above all, these include painters and gilders — masters of all the techniques of painting needed to artistically paint statues and embellish them with gold leaf. We also work together with talented carpenters to implement altars and liturgical furnishings. In addition, we have smiths and casters in our family network who produce metal adornments and cast bronze sculptures. For exceptional concepts we also work with skillful tailors and glass artists. These talented people are all masters of their craft and enjoy our fullest trust — some of them over several generations. With every one, we are closely connected friends or have family connections. The various workshops and studios are mainly in Oberammergau, Unterammergau and the close surroundings of our rural district. We also work with individual close friends who are master woodcarvers from other alpine villages. Above all, the trusted teamwork and the fascinating results of our joint work are what’s important.

Our studios consists of these artisans 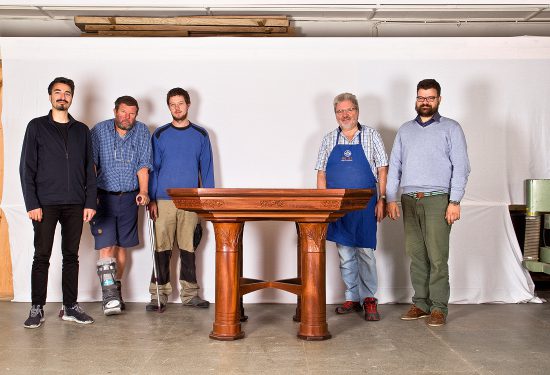 Two generations working closely together. Sepp and his son Simon are an excellent woodcarver and carpenter and are part of our big family of artisans. 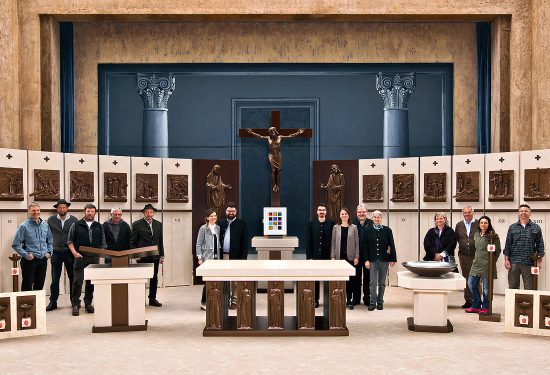 Thanks to our close-knit team, very large projects can be realized where we are responsible for the entire church decoration.

All around the world, we are trusted when it comes to sacred art. Because we are convinced that the highest level of customer satisfaction comes as much from attentive service as from top quality and experienced craftsmanship.

On the one hand, our strength lies in an active project support. We want to help everywhere where our expert knowledge is needed. On the other hand, we strive for harmonious collaboration in our collective. We are used to working together with differing constellations of contributors and contact people. Direct contact with church congregations is always something special because the dialog takes place between exactly the people for whom the sacral space is being designed. Furthermore, cooperation with skilled liturgical partners and (interior) architects is a combination with many benefits where we particularly appreciate the professional exchange. Above all, we place great value on creating an atmosphere of mutual trust. This also applies to collaboration with designers and artists who trust us with the execution of their designs. We are open for every genre and idea and have been commissioned by the most diverse artists for the physical realization of their concepts. Being part of something big, being able to contribute and sharing experiences with other people is our motivation with every new commission.

We love to work hand in hand with 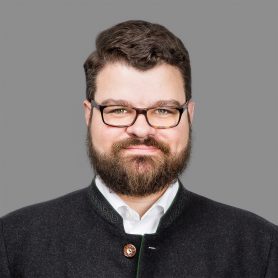 Top-quality service for your project

Agreeable contact and smooth, trusting communication are very important to us. We’ll be happy to invite you to get to know us personally in Oberammergau or in a live presentation via video conference. Our clients enjoy complete and all-round service for their projects. We offer church board members, art committees and partners for religious interior decoration comprehensive customer care. What distinguishes us, especially in the concept phase, is being a passionate sparring partner. Even in the very early stages of the construction phase, we support you when it comes to questions about design, feasibility and cost estimates for interior fittings. For every subject, we’re happy to provide individual image material or even work up preliminary sketches for initial concept ideas to give architects and liturgical consultants the best assistance in tendering situations. The start of every project is marked by an interview and our sketch process for final acceptance. Over the course of the project, we keep you up to date with photos of the intermediate stages.

Best all-round service for our clients